What is the Development Academy Program?

ATL Futsal DA teams compete against other futsal clubs in local and regional games and tournaments. Teams that are successful at regional tournaments are invited to compete on the national stage.

The DA program combines high level coaching on the court with a Sport Psychology Module off the court that all players can access when they join ATL Futsal DA. ATL Futsal believes in helping players reach their potential and be well-rounded players and individuals by focusing on skill acquisition and most importantly behavior.

Development Academy players will learn skills and habits through futsal that will enhance their outdoor soccer abilities. Futsal is NOT soccer, Futsal is its own sport so therefore players are challenged in a different manner that prevents burnout. Players will be taught futsal specific techniques, tactics, and behaviors. 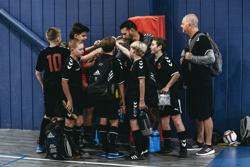 "We are extremely excited to be able to offer an accessible, affordable and accountable development program to more families in Atlanta.  We have provided the highest level of coaching and leadership training since we started back in 2016."

" To be granted Academy status is a reward for what we are doing but also a challenge as we are looking forward to making Atlanta one of the strongest cities in the country for futsal.  If we can do this, we will start to produce players that can play at the highest level. Futsal is responsible for producing great players like Messi, Ronaldo (Portugal), Neymar, Coutinho, Kaka, Ronaldinho, Rivaldo, Zico, Ronaldo (Brazil) and of course, Pele.  The more we can grow the game, and competing against the best futsal players in our region and country will give us a better chance of producing world-class players " - Alan Ewing, ATL Futsal

The court is heating up in September with ATL Futsal Development Academy Tryouts for the 22/23 Season! Development Academy tryouts are open to all players (boys & girls) born 2015-2010 regardless of club affiliation. Evaluations will take place in Sharpsburg (Venue TBD). Times are as follows:

Tryout dates are as follows:

Players are encouraged to attend all four evaluation dates, but are not required to attend if a conflict arises. Team selections will be finalized following the fourth and final tryout date on September 30th. ATL Futsal is projecting the following teams for the 22/23 Season:

*For age groups with more than one team, teams will be tiered based on skill level

For players born 2009-2004, we will be offering a winter training program beginning in December. More details to come soon!

If you have any questions about Development Academy Tryouts or the 22/23 season, please email david@southernfutsal.org

We have multiple locations throughout Atlanta.  To find the closest, click on the facilities page.

Want to a program that engages everyone? At Connect Sports we offer activities, sports for players of all ages, experience and abilities.  From Beginner top Advanced & Novice to Expert, our coaches can help develop the physical, technical, tactical and Psych-social side of your game.

We are affiliated with US Youth Futsal and two of our programs are National Academy members - ATL Futsal & BHM Futsal.

Teqball is a soccer-based sport, played on a specially-curved table (the Teq table), which is attracting a new generation of athletes and amateur enthusiasts (teqers), whose ambition is to develop their technical skills, concentration and stamina.  TEQBALL has grown to over 51 countries and loved by thousands of world class soccer players.  Our goal is to be an Olympic Sport by 2028.  SOUTHERN TEQBALL started in 2020 to grow the sport and competition in GA, AL, SC and NC.